Growing up in the 70s was quite a bit different than today. Saturday evening’s were spend as a family around the tv. With only 3 channels to choose from there wasn’t too many arguments over the remote control; there wasn’t one! Similarly if you wanted to text your mate; then you needed an envelope and a postage stamp.

Obligatory viewing was “The Generation Game” hosted by Bruce Forsyth. Teams of relatives would compete in rounds of challenges. Usually skills that were demonstrated for 90 seconds then the contestants would have a go and be judged. Rolling cigars, making pottery or bending glass are all trades that need years of practise yet Mr Forsyth excelled at belittling contestants at their best efforts after the briefest of demonstrations.

The big prize always was a couple of minutes in front of a conveyor belt of prizes. At the end if the contestant could recall the items on the conveyor belt; they took them home! Every episode had a ‘cuddly toy’ and ‘fondue set’, later in the 90s ‘ the Brucie bonus’ was added.

Watching tv last Saturday and the mention of a conveyor belt resonated in my ears. Ever the wit I declared “I don’t want a cuddly toy and you can keep a Brucie bonus!” Laughter ensued and that was the end of the matter; or so I thought.

Fast forward to Monday evening and as I am preparing dinner, in walks the missus carrying a box and announcing there’s a present for you. Cautiously I accepted the gift with thanks. Opening the box, I realized the lesson “be careful what you wish for?” Inside was a traditional fondue set.

What I knew about fondue was 3 things;

& though I’ve visited Switzerland, I have never had it! This was going to be fun.

After the initial assembly which could have passed for a challenge on “The Krypton Factor”, I began researching recipes and fuel. Fuel because the fondue has a trangia which produces a flame to keep the fondue warm ie liquid.

As far as recipes are concerned fondue requires 3 basic ingredients; cheese, white wine and bread. Swiss cheeses such as gruyere and Gouda but any mature hard cheese will do. I used 1/3 Gouda to 2/3 mature Red Leicester, coarsely grated. Adding 1/2 cup of white wine and a pinch of nutmeg, I brought the contents to a gentle simmer over medium heat in saucepan. Next I added a tablespoon of cornstarch to bind the mixture together before decanting to the porcelain bowl of the lit fondue set.

Having visited the local supermarket after work, I had first choice over the ‘reduced to clear’ bakery section and picked up a myriad artisan rolls (sun dried tomato and basil, multigrain, sunflower seeded). Slicing into cubes of about 2.5cm (inch). Skewering the bread, we dunked and talked, dunked and laughed, dunked and suggested alternatives to cheese fondue, and finally with the last dunking of bread we agreed, this has to be done again.

Fondue is a great party treat, people around the table and around the tv. Who would have thought what a Brucie Bonus! 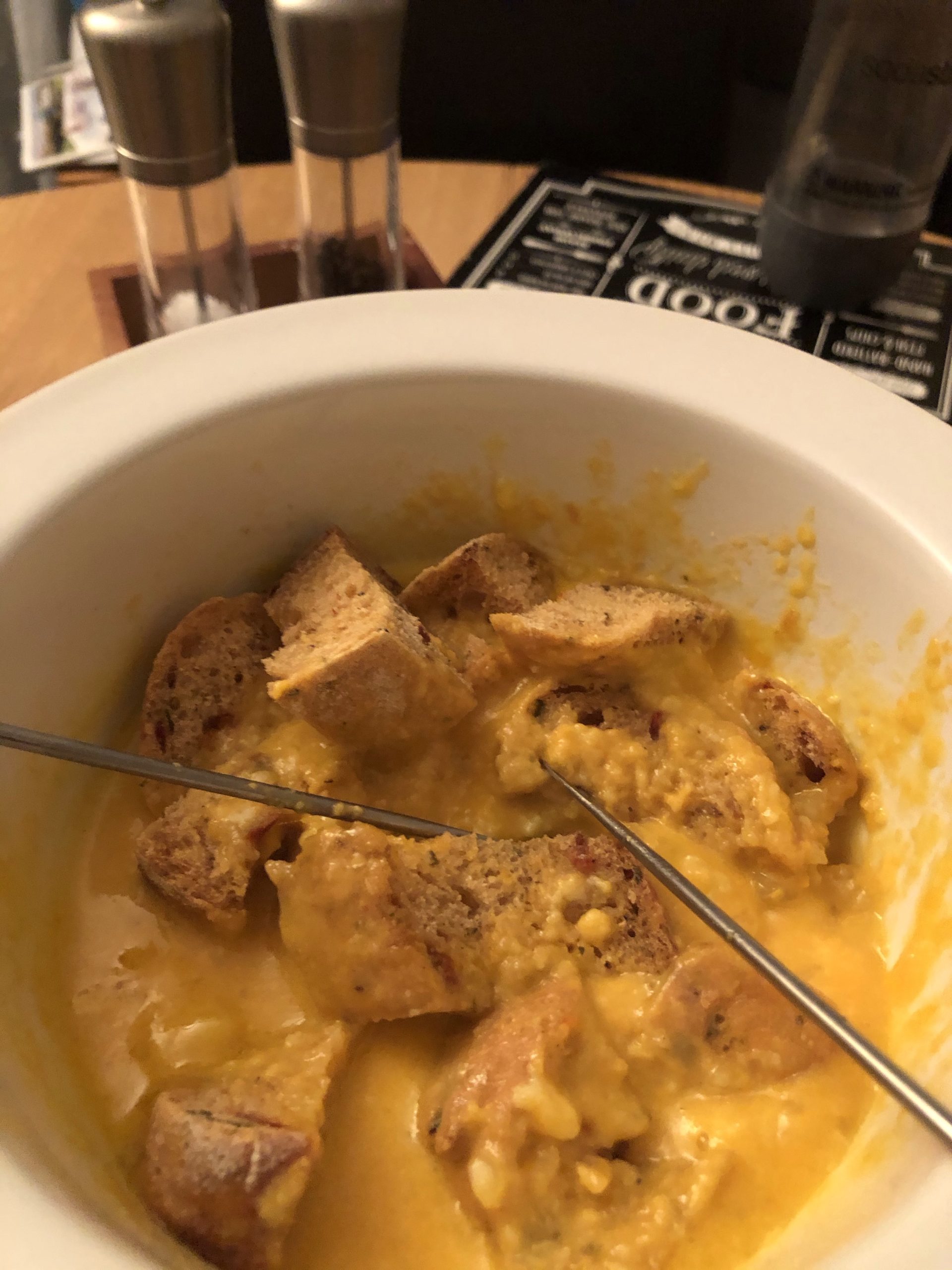