Another Monday and another opportunity to feed good friends. One of the dishes we’ve shared is the meat pie. Having sampled the ‘mother’s’ and the ‘daughter’s’, I felt it was time for the men to step up to the mark and try and compete with which I must say is, incredible competition.

So, I decided upon a steak and ale pie. Not very adventurous but pie making is about giving the pretence of simple hearty food without consideration for the love that goes into the process.

As a proud Welshman I chose Welsh stewing steak which I trimmed the excess fat from and diced the meat into smallish chunks before adding it to my casserole pan which had a generous coating of olive oil and 4 thinly sliced garlic cloves and a large onion which had been sweating down for about 15 minutes.

Next there was need for some liquid in the form of a cup measure of Butty Bach ale. To this I add two beef stock pots and some carrot, peas & mushrooms, and left the whole thing simmer on a medium low heat for approximately an hour and a half.

Ready for the oven

I then set the covered pan aside until the next evening when I made up my shortcrust pastry and finished the pie. The standing time had allowed all the wonderful flavours mix and settle.

I baked the pie at 200deg C in a fan assisted oven for about 40 minutes.

Ready for the table 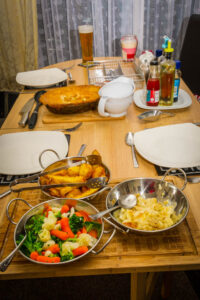