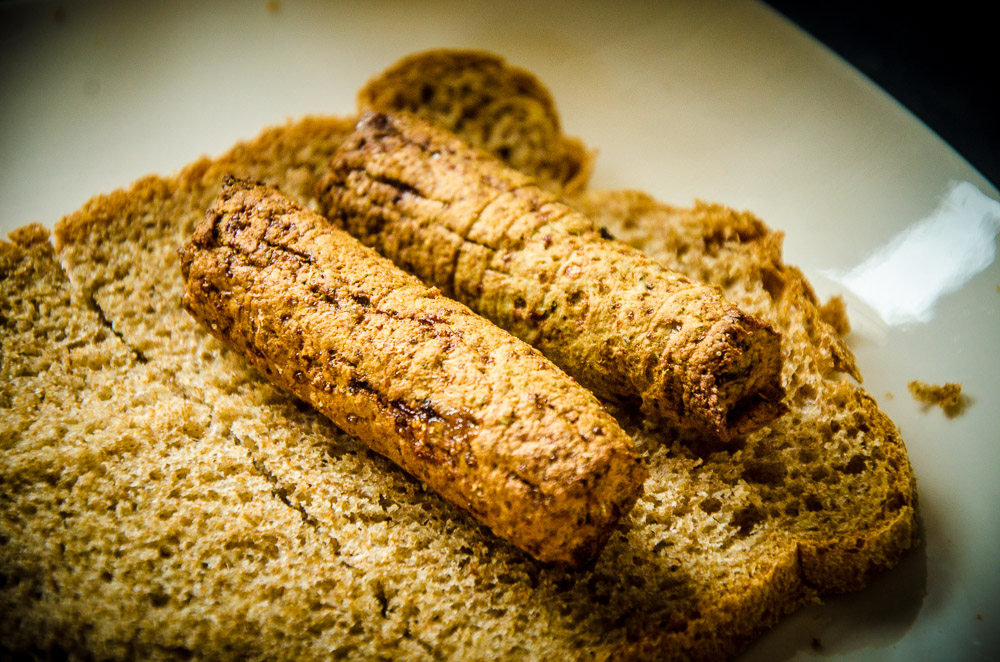 Not quite. Every cuisine has some sort of tubular fashioned meat or vegetable delicacy. Whether it be sushi or chorizo, Lincolnshire or haggis; the sausage features high on the list of ‘every day’ foods.

The humble Hamburger was of course though a deviant, is still a sausage at heart. You may also have a craving for the breakfast sausage pattie from the Golden Arches – though temporarily unavailable.

So to extend my repertoire and further my self sufficiency I ventured into sausage making. What does go into our food and how does that affect the taste, texture, colour without considering what’s actually added?

Finding online resources for recipes for the humble sausage is a task in itself. It would appear our reliance upon shop bought means that cooks are publishing in their masses recipes that contain sausage as opposed to making sausage. Sure there’s plenty of artisan chorizo or salami recipes. Digging deep I finally found one. 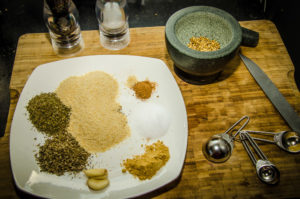 Basically this recipe is meat including the fat, thyme, sage, salt, ginger, coriander seeds, garlic, bread
crumbs, & nutmeg. I also found advice that suggested using hog case for the skin. Delving into the freezer I found a bag of meat which I thawed over night. In the morning I discovered two large beautiful beef steaks (mea culpa I do not label). Although there was some fat attached I went back to the freezer and spied a pork loin steak which I had previously vacuumed packed.

I now I had 900gms of meat (2lb in old money). To help the process of mincing I cut the meat into cubes. 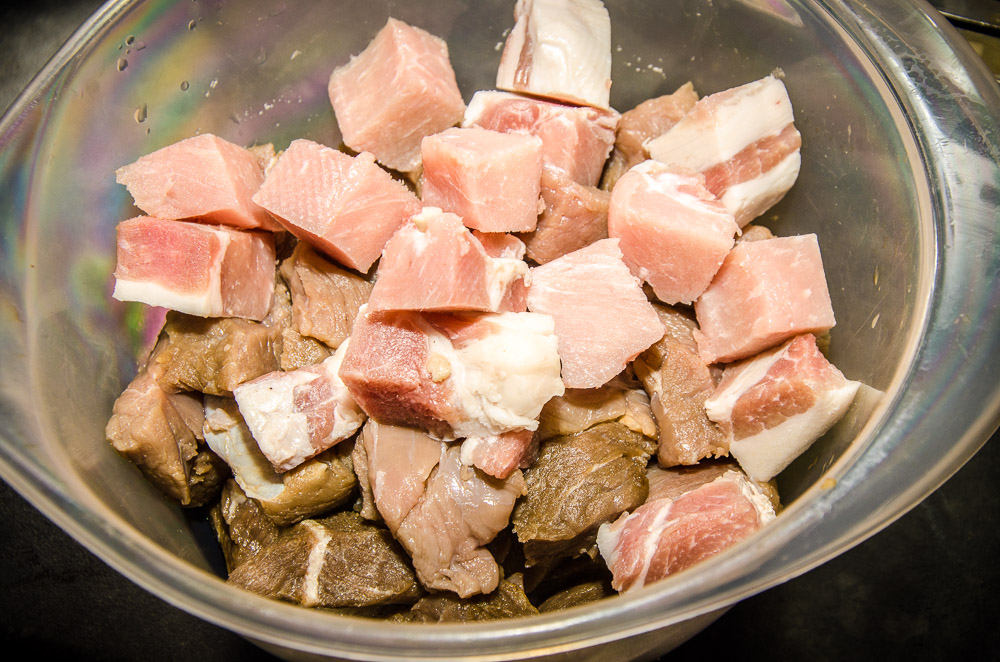 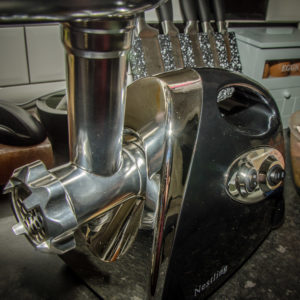 The process of making sausages involves having to mince the meat twice; once to have coarse mince which then is seasoned, and a second mincing, a finer grind to make a paste(y) texture. I use a mincer with a sausage attachment therefore the meat will pass through 3 times in total. I began mincing!

After the second pass of the mincer the meat is ready for making into sausages. Traditionally pork and beef sausages are covered in hog’s cases (Natural casings are made from animal intestines) which come cured in salt. You need to wash this salt away before attempting to line the machine.

All set I began to make sausages. I quickly felt like a contestant on the The Generation Game as the meat had a mind of its own.I tried my best but when I noticed wrapping occurring I stopped and thought maybe there is a chance of making skinless sausages; after all I have bought enough of them. I must confess this seemed a lot easier and more over, I could make vegetarian versions for my veggie peeps! Hoorah, out of adversity a success story. 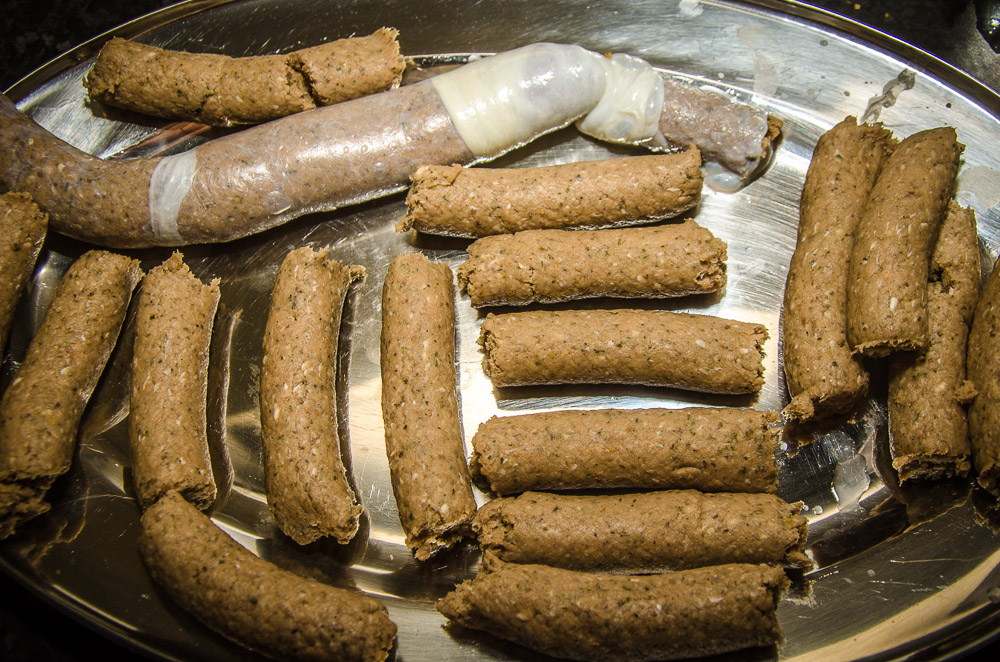 There was only one thing left to do and that included warming up the air fryer, cutting a slice of wholemeal bread I baked yesterday and putting the kettle on for a cup of tea. My anticipation was great as I sat down to sample my labours.

I must confess my sausages did not live up to expectation. Tasty but dry. I don’t believe hiding my culinary mishaps – its only undertakers who bury their mistakes.

Having looked further I found other sources that included using wine vinegars to add moisture to mix. This is something I will definitely be looking into. My first batch will be enjoyed and I did get a whole different level of satisfaction from making. There is plenty of scope with these bad boys for casseroles or even good old fashioned bangers & mash. 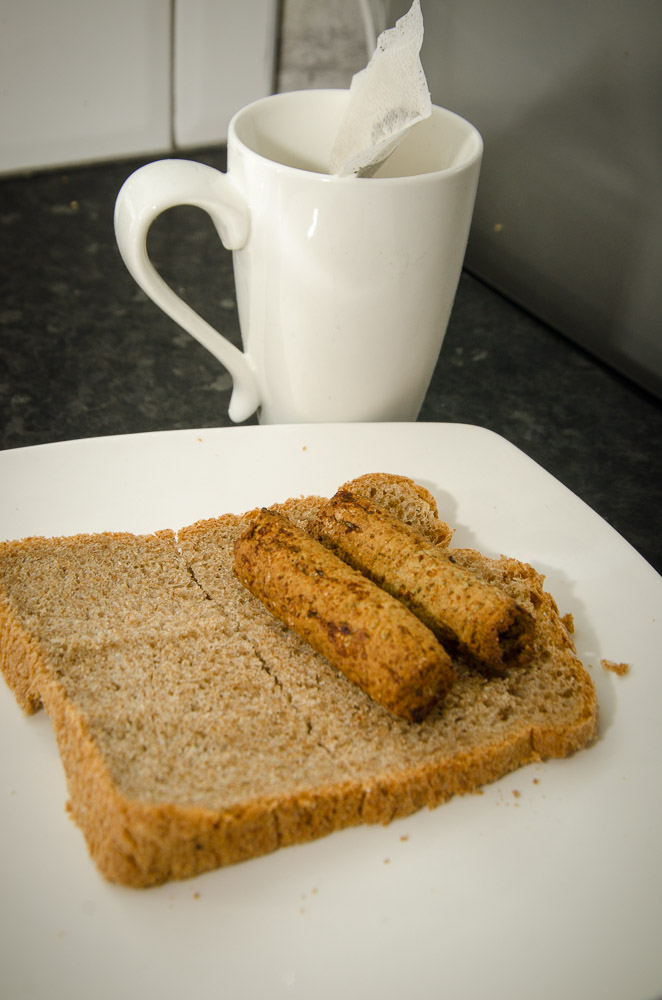